The Pololu Pushbutton Power Switches are sophisticated power control alternatives to bulky mechanical switches. The main function is pushbutton-based latching power control, where one push turns on power and another push turns it off. Additional control inputs allow advanced applications such as automatic shutdown by the device being powered. This HP version operates from 4.5 V to 40 V and can deliver continuous currents up to around 16 A.

The Pololu Pushbutton Power Switch is a compact, solid-state power switch that features built-in reverse-voltage protection and is controlled by a momentary pushbutton: one push turns on power and another push turns it off. This is a patented design initially created for use in our own products as an alternative to bulky mechanical switches. Because the switched current does not flow through the mechanical switch, a large variety of small, low-power switches can be used to control a substantial amount of power. The use of momentary switches also allows multiple switches to be used in parallel to control the power to one load.

The board has a small pushbutton already installed and offers convenient points for connecting external pushbutton or tactile switches in parallel. It also offers several alternate pushbutton connection options that result in push-on-only or push-off-only operation, and additional inputs enable further power control options like allowing the load to turn off its own power, which can be beneficial when used with battery chemistries sensitive to over-discharging.

Warning: Do not use this switch as an emergency cutoff or similar safety disconnect in applications where failure to cut power could lead to injury or property damage.

The Pololu Pushbutton Power Switch works well in its intended application as a DC power switch for small robots, but because it is fundamentally different from a mechanical power switch, the benefits and drawbacks of the components must be fully considered. 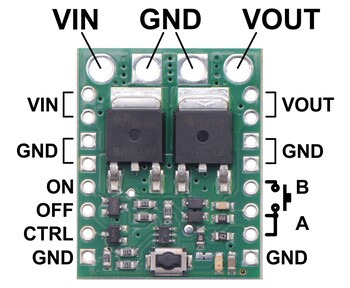 The simplest way to control the Pushbutton Power Switch is via its installed pushbutton: one push turns on power and another turns it off. Alternatively, a separate pushbutton, such as a remote panel-mounted unit, can be connected to the A and B pins and used instead. Multiple pushbuttons can be wired in parallel for multiple control points, and each of the parallel pushbuttons, including the one on the board itself, will be able to turn the switch on or off. The latching circuit performs some button debouncing, but pushbuttons with excessive bouncing (several ms) might not function well with this product.

The ON, OFF, and CTRL pins on the pushbutton power switch do not require a pulse to operate, but leaving any of them in a high state could interfere with the switch’s other control methods, so we generally recommend using pulsed signals with them. The input structures for the three control inputs are shown below: 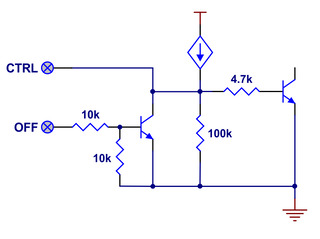 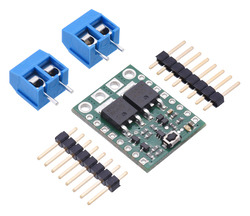 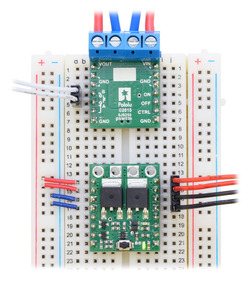 Two 8-pin straight breakaway male headers and two 2-pin 5mm terminal blocks are included with each switch, and you can choose which of these components, if any, to solder to the board. The terminal blocks work with the four large holes, and the header strips allow the switch to be used with solderless breadboards and perforated circuit boards with standard 0.1″ spacing. If you want to use the terminal blocks, we recommend you install them on the side of the board without components, as shown in the above breadboard picture. The terminal blocks will cover one of each of the smaller VIN and VOUT holes, so you should not solder header pins into those holes if you plan on using terminal blocks.

Note that the terminal blocks are only rated for 16 A, so for higher-power applications, thick wires should be soldered directly to the board. 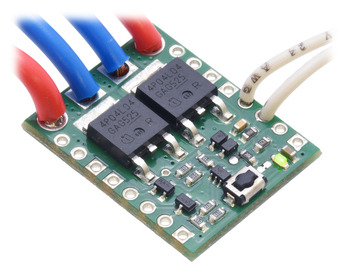 Interrupting large currents can cause voltage spikes (positive on the input side and negative on the output side) that depend on the inductance of the power connections and that can exceed the limits of the device. Appropriate measures to limit the size of these spikes include minimizing lengths of wires, placing capacitors at the power switch to smooth the spikes and absorb some of the energy, placing a schottky diode across the power output to absorb negative spikes, and placing a transient voltage suppressor (TVS) across the power input to absorb positive spikes.

Characteristics at limits of operating range

The switch operating range is limited by the ability to change state reliably. At low voltages, the switch is difficult to turn on, and the switch will turn itself off once the voltage falls far enough (this shutoff point can be as high as 4.5 V). At high voltages, the switches are more likely to turn on when power is initially applied. The reliability of turning off is affected by a combination of the supply voltage, the amount of bouncing on the pushbutton switch, and the amount of noise on the supply line. For applications at the high end of the operating range, tests should be performed to ensure that the device can properly turn off.

$4.95
A pushbutton on a lead for when you need another pushbutton or you want it away from your micro:bit One lead goes on 3v or GND and the other lead goes on 0, 1, or 2. For advanced applications it is...
Add to Cart

$4.45
This breadboard-compatible module is an alternative to bulky power switches. It uses a small integrated slide switch to control a high-side power MOSFET that can deliver continuous currents up to...
Add to Cart